In the city of Barcelona, 15% of households with children cannot afford to keep their homes at an adequate temperature during the cold months and 13.4% have suffered delays in the payment of supplies linked to their homes. Despite being high, these percentages are only averages hiding strong inequalities between different areas of the city, as is the case in the district of Nou Barris, where 35% of households cannot maintain an adequate temperature and nearly 29% are late in paying their bills. The data also shows us that the correlation between these two indicators is rather low; that is to say, the families that have difficulties in maintaining an adequate temperature in their homes do not necessarily coincide with those that have delayed bills. Therefore, the total population affected by energy precarity (one factor or the other), would be even higher.

The data becomes even more alarming when we consider more stigmatized and invisible groups, such as families with irregular supplies: among the 160 families in this situation surveyed by the Alliance Against Energy Poverty there were at least 145 minors. These children live permanently in a situation of insecurity and risk of fire and/or electrocution due to the refusal of supply companies to install meters in homes in an occupied situation.

Traditionally, the focus of energy precarity has not been on children and adolescents and therefore there is little data on this subject and a deficit of specific public policies. Several studies consulted and interviews conducted with experts and affected families indicate, however, that the lack of decent energy services during the first years of life can have irreversible impacts on people’s future physical, cognitive and social health.

Faced with a situation of energy precarity, families generally opt for four strategies: reducing energy consumption below the level needed to cover basic energy needs, reducing consumption of other goods and services to be able to meet the energy bill, getting into debt to meet the bills or, finally, connecting to the grid in an irregular and insecure way. These strategies have different impacts on the physical health, mental health, education and safety of children.

In terms of physical health, there is a high incidence of asthma, bronchitis and other airway diseases, which become recurrent and difficult to cure; cases of malnutrition have also been reported as a result of the poor diet often suffered by families who have to decide whether to eat well or pay bills.

There are also serious effects on the mental health of children and young people such as those related to a possible lack of physical hygiene, stigma, isolation, guilt or family stress due to the inability to provide children with decent living conditions and harassment linked to unpaid debts, etc. The situation of adolescents is especially delicate, as they demand more privacy, access to technologies, prioritize relationships with their peers and may seek differentiation and/or confrontation with their families. In fact, a study carried out by the National Children’s Bureau of the United Kingdom points out that one out of every four adolescents living in precarious energy conditions is at risk of suffering mental health problems (in the total adolescent population the proportion is 1 out of every 20).

Nor should we underestimate the impact of energy precariousness on the educational dimension, which translates into absenteeism due to the recurrence of illnesses, lack of concentration, difficulties in studying at home, possible situations of bullying, stigma or lack of nightly rest.

Finally, there are severe impacts on child safety resulting from irregular connections to supplies. In 2014, four minors lost their lives in the municipality of El Vendrell (Barcelona) in a precarious home from which they had been evicted by Bankia and which they had subsequently occupied by tapping into the electricity supply.  In 2016, the firemen of the UGT (Spanish Workers’ Union) warned about the increase of fires and the electrical risks derived from faulty installations, connections without adequate protection, overloading of installations and electrocutions.

Access to energy is essential for human dignity and from the perspective of the best interests of children, a secure supply for these households should be automatically guaranteed. There is a strongly criminalising discourse towards these families, generated by some falsehoods around the irregular supplies. The reality is that the data shows that only 1% of what the companies call “electrical fraud” comes from vulnerable families and that the majority of families in a situation of occupation would like to regularize the supply and pay for the service.

It is essential to understand that the energy needs involved in the tasks of care and support of life are especially present and necessary in the daily lives of children. So, families will seek ways to provide energy services even if they are unsafe and it is urgent to reverse this situation.

In view of the consequences that living in energy precarity can have for minors, it is necessary to undertake transversal measures to face this situation. From entities such as Enginyeria sense Fronteres and the Alliance against Energy Poverty, we propose to extend the detection of risk situations, since many families remain outside the official circuits: we suggest, for example, a proposal of a detection protocol in educational centers. It is also necessary to establish aids aimed at children and adolescents that do not paternalise families and that are able to face situations of severe vulnerability from a social justice perspective. Universal child allowances have proven to be effective in other European countries – Germany, Austria, Belgium, United Kingdom, etc. – to reduce the risk of poverty in households with children.

If from the perspective of children’s rights we think we must provide universal education and health, and energy precarity violates both, why shouldn’t we think of a dignified habitability that includes enough water and energy not to compromise their physical and mental health? In what way do we expect equality of opportunity to work if within the basic provisions for children we are not incorporating basic supplies and residential security?

We must break with the view that childhood is a transition to adulthood and not a group with specific rights. It is necessary to ensure the active participation of children in the definition of public policies. It is also urgent that we, as a society, abandon individualistic positions that link the fate of children to the material conditions of the adults with whom they live, and that we collectively take up the challenge of real equality of opportunity.

The principle of the best interests of the child is the set of actions and processes that must guarantee an integral development and a dignified life to the child, as well as the material and effective conditions for the maximum possible well-being. Therefore, it not only implies actions related to the custody of minors in cases of violence, mistreatment or neglect, but also to watch over the economic, social and cultural rights of our children and young people in order to guarantee them the real possibility of choosing a future.

Finally, we have to take into account that the well-being of children is closely linked to the well-being of the adults with whom they live. It is therefore a question of adopting specific measures for children, but it is also necessary to act on the problem in a global manner. It is necessary to remove the focus of energy precarity from the economic capacity of households and to address its structural causes: abusive prices, opacity in the costs of bills, poor condition of housing, lack of maintenance of distribution networks and management aimed at maximizing the economic benefit of companies instead of ensuring the energy rights of the population. Because the first step must be to start talking about energy rights and to question the commodification of such essential services as basic supplies.  Therefore, it is necessary to establish protocols to increase the detection and generate policies that counteract the impacts of energy precarity on children but it is even more crucial to promote an active citizenship during childhood that questions and demands their energy rights for a dignified life. 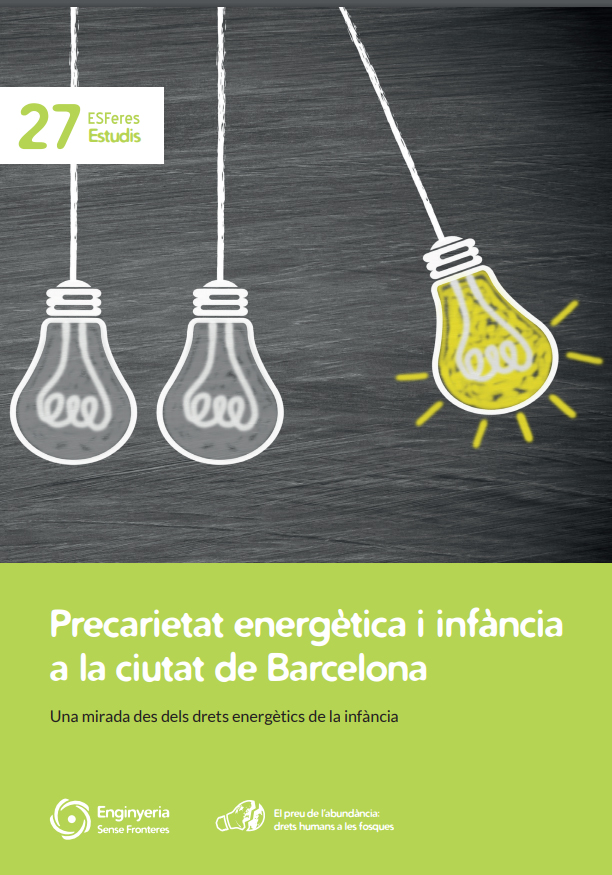 Webinar on energy poverty in children and adolescents Last Thursday, May 14, the […]

2019, tot un any d’activitats i reivindicacions